Track was tapped to help build a socially driven promotion and mobile Mattress Firm that promised to deliver the best fix for a troubled night of sleep to consumers. We built an eye catching mobile showroom with strong brand presence that traveled throughout New York, Detroit, Dyersville and Houston. Track provided management of logistics and production in each city. Consumers were given a CTA via a social sweepstakes sharing an image of their unbearable sleeping situation and using #JunkSleepRemovers to call in help. The mobile showroom pulled up to 5 lucky winners houses in each city giving them a chance to consult with a MF Sleep expert and pick the mattress of the sleepy dreams. Track oversaw the management and fulfillment of the 5 lucky winners in each city resulting in a campaign that garnered over 17.6m total potential impressions and 20 guests that now have sweet dreams. 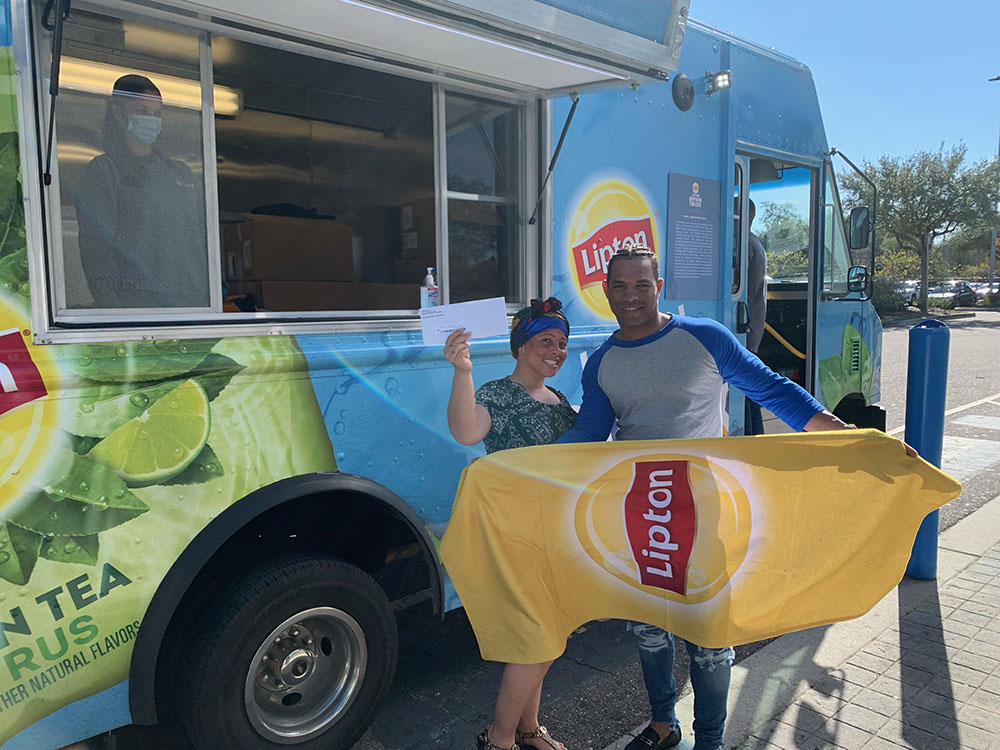 To give back to the community, Track produced The Lipton Giving Truck, a visual mobile billboard filled with gift card prizes and Lipton branded premiums. The Lipton Giving Truck hit the road for a week, stopping at 16 Lipton retail & food service partners in 4 markets in the Southeast. At each stop, a team of Brand Ambassadors in Lipton branded uniforms encouraged consumers to step up & spin the prize wheel for a chance to win a premium prize. All consumers walked away a winner! 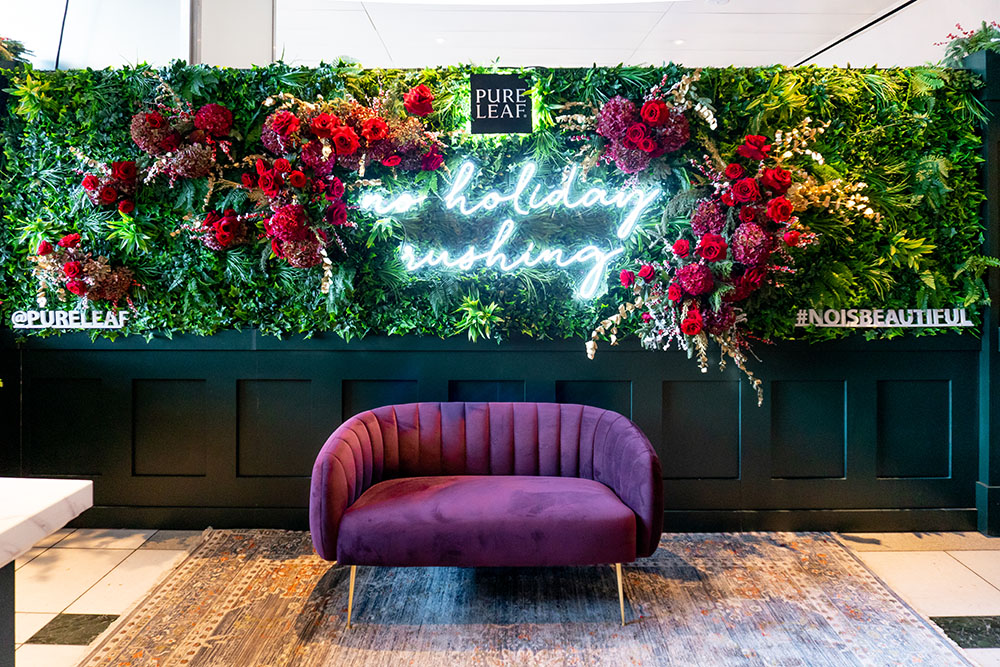 To support the Pure Leaf message of “No Holiday Rushing”, Track created a consumer experience that encouraged consumers to slow down during the holidays. As consumers were ready to “rush” into their holiday shopping, Track produced a Covid-safety compliant pop up event at the iconic shopping destination, the Shops at Columbus Circle. Attendees were invited to sample premium Pure Leaf mocktails, take photos in the holiday inspired lounge and get their gifts stylishly wrapped, all compliments of Pure Leaf. The event generated excitement among consumers and retailers, spreading holiday cheer and reminding consumers to enjoy the holidays. 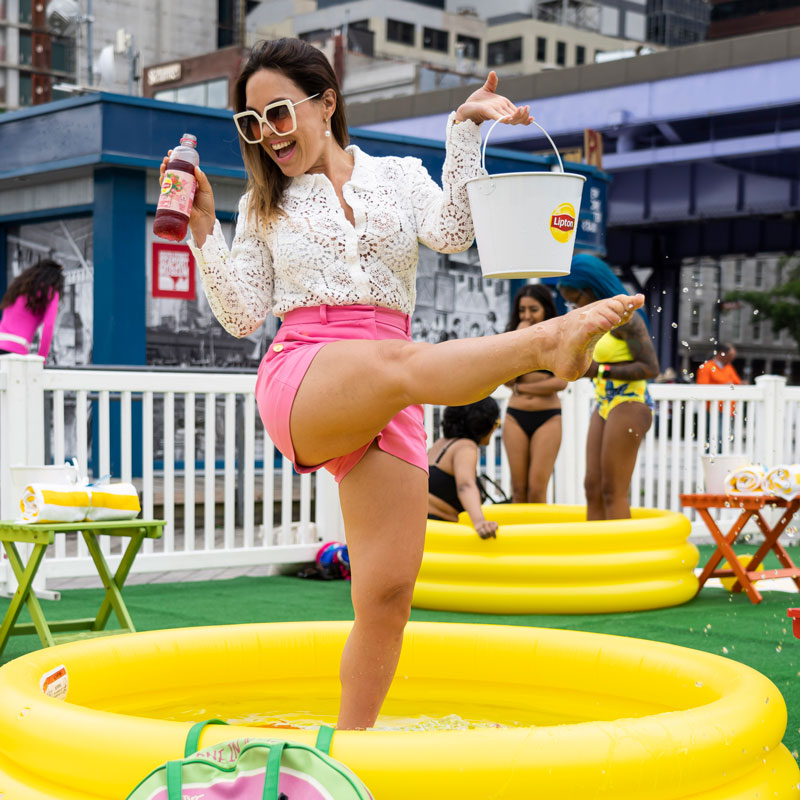 To support PR buzz of Lipton during the summer months, Track created a program that captured the essence of summer. The program leveraged Lipton’s new creative insignia, the yellow circle, National Iced Tea Day and Luke Bryan as an ambassador.

As consumers were ready to jump into summer, Track produced a covid-safe multi-city pop up event, where attendees were invited to cool off in their city in Lipton branded inflatable pools, sip Lipton Iced tea, and enjoy summer, socially distanced of course! Promoted through a strategic social program with additional amplification in the brand’s key markets, the Lipton Pool parties made waves among consumers. 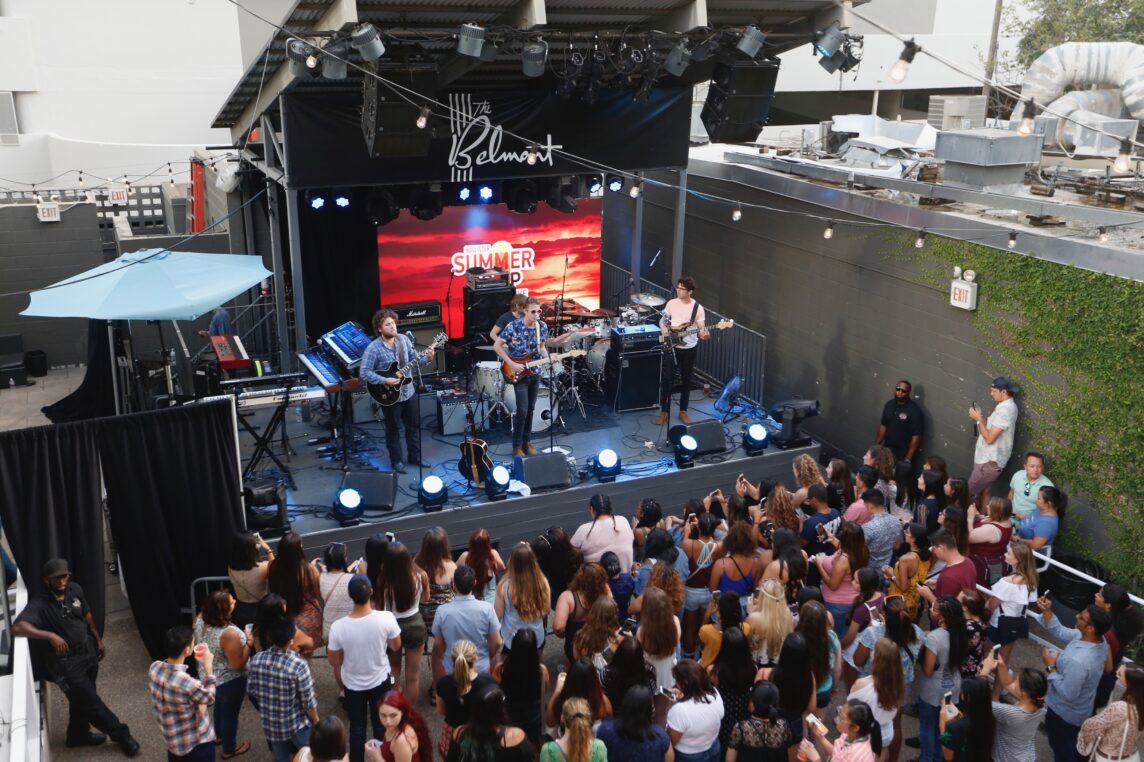 For their three-part 2017 campaign, Hollister sought to capitalize on the hype of Summer Solstice with a blowout activation. Through the production of a thematic event activation with performances by exciting artists, Track helped the brand amplify their ethos: the icon of an endless summer.

Two events were held on June 21st, the official first day of the season, inviting guests in Boston, MA and Austin, TX to experience sunset views and summer vibes. Staggered by time zone, the Hollister curated concert series was dubbed, Summer Drop Live. Each concert was captured on live broadcast. Boston performances by Charlie Puth and Corey Harper and Austin performances by Timeflies and Bea Miller were shared in real time to Hollister’s social audience.

Track handled all elements throughout, including talent/influencer booking, development of pre-event radio promotions, concert production, and ideation of creative touchpoints.

Pure Leaf was looking to announce their newest family member — Herbal Hibiscus Iced Tea — by joining the excitement of the pending birth of the Royal Baby of Sussex.

What better way to be apart of the trending topic of Royalty than by Pure Leaf offering families the chance to win the royal treatment of a Royal Family (style) photo shoot.

Families lucky enough to welcome a baby on the same day as the royal baby, would be eligible to entered to win.

Track managed the complete program development and execution of the social sweepstakes and awarded ten lucky families the Pure Leaf Royal Photoshoot Experience with renowned US family photographer Yaron Lesham. Track coordination the travel and schedule of all (10) photoshoots, which included Yaron and the custom Pure Leaf Hibiscus set designs/props traveling to each winner’s hometown, for a personalized family photoshoot. 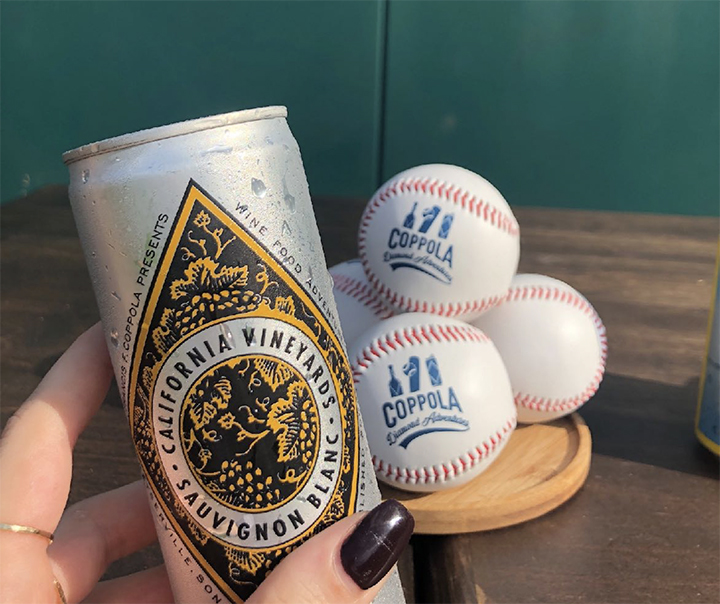 Coppola Winery had a vision – one that challenged the outdated association of beer and baseball. Why shouldn’t wine-lovers be able to indulge just the same? With the release of four signature varietals in full-serving cans, Coppola saw an opportunity to fulfill this vision. In partnership with the brand, Track helped them make their way into the stadium and onto the field.

Track ideated and developed a re-imagined day at the ballpark. In Oakland, Arlington, and Atlanta, guests were invited to enjoy special stadium access and a variety of memorable programming. Each event included games on the field, an array of stadium-inspired treats, and fun photo opportunities.

In advance of each activation, Track lead local market promotions – anchoring onto the brand’s own national campaign. Messaging shared through radio and influencers offered a CTA to win event tickets. 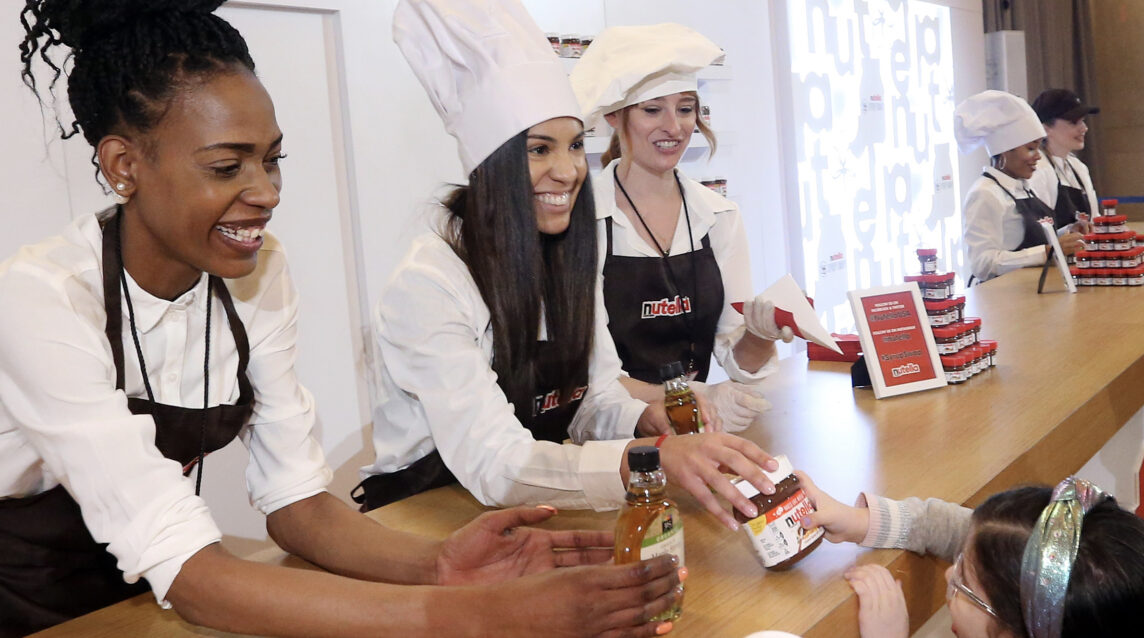 In celebration of National Pancake Day on February 25th, Nutella encouraged pancake-loving families to incorporate the beloved hazelnut spread into their morning routine. To incentive this swap, the brand offered a free jar of Nutella to those who were willing to hand in their maple syrup.

Track designed and produced the Nutella Syrup Swap Shop, bringing it to Grand Central Station’s Vanderbilt Hall in NYC. Upon entering through a statement-making Nutella Jar-silhouette archway, guests were guided toward one of two swap stations – those who came without syrup received a sample-sized Nutellino’ jar, and those who came prepared received both a full-sized jar and a custom decorated pancake for all members of the family. “Pancake artists” took design requests and drizzled decorative, Instragram-ready Nutella toppings.

A table was set for guest to enjoy the treats on-site, surrounded by three-dimensional Nutella wall art. 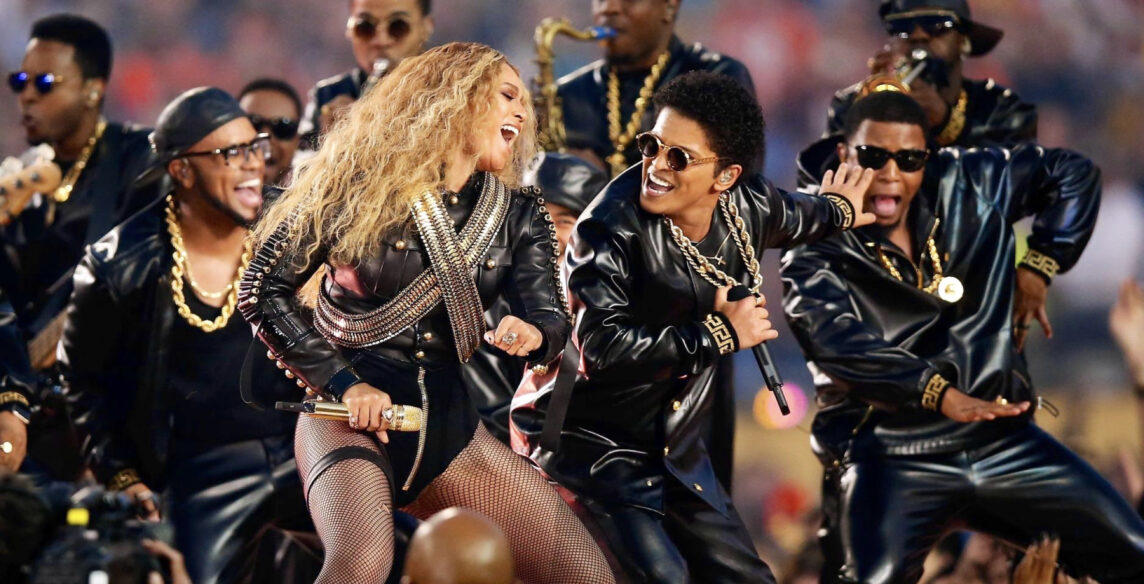 Each year, Pepsi produces the Super Bowl Halftime Show and a big-impact sweepstakes that invites lucky fans to experience it for themselves. Since 2013, Track has managed the show and sweepstakes promotion, as well as the full on-the-field experience.  Components of each campaign include ticket inventory, execution of promotional elements (social, national, sweeps, radio), winner selection and vetting, management of travel to Super Bowl city, and of course, production of once-in-a-lifetime experience during the Super Bowl itself.   Social sweepstakes vary year-to-year, providing original engagement each time around. 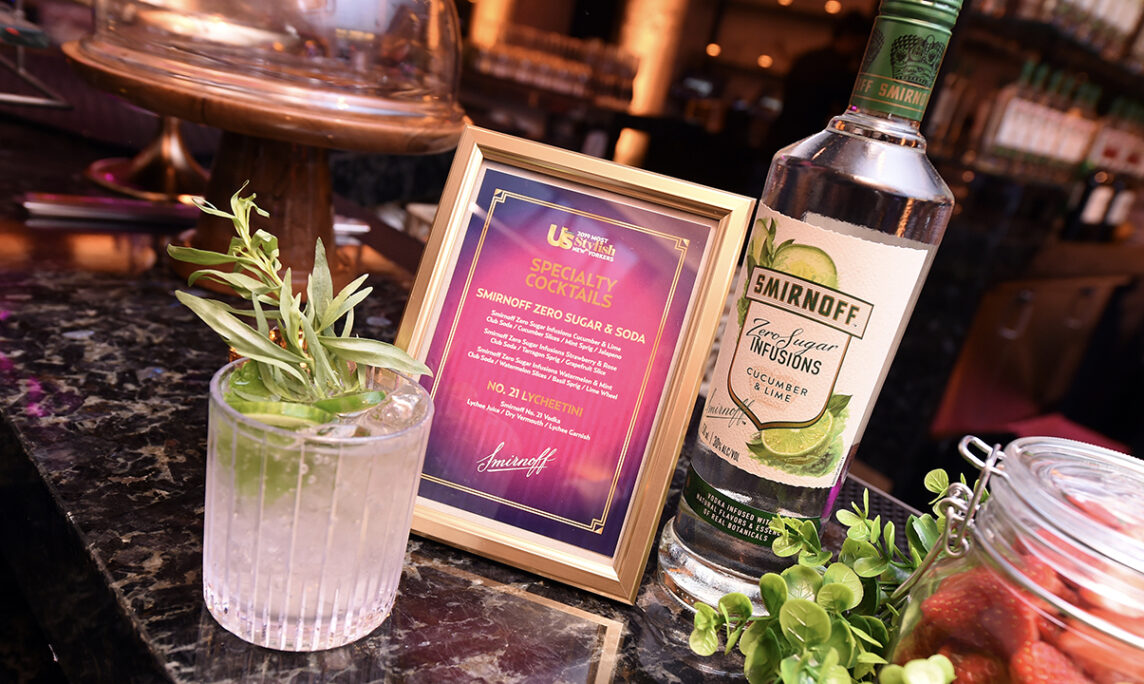 For four years running, Track has executed US Weekly’s high-profile, NY Fashion Week event – an evening that commemorates the magazine’s pick of ‘Most Stylish New Yorkers.’

To bring each production to life, we’ve transformed notorious local venues – Vandal, Magic Hour, and Cathedrale- into a vision of US Weekly’s elevated tastes.  An invite-only guest list of industry tastemakers were invited to experience buzz-worthy programming, made more enticing through the help of relevant beauty and liquor sponsorships.